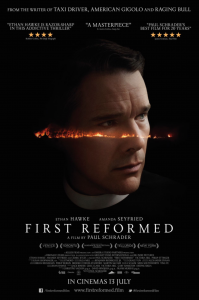 Synopsis: Reverend Ernst Toller (Ethan Hawke) is a solitary parish priest at a small church in upstate New York, which is on the cusp of celebrating its 250th anniversary. Now more of a tourist attraction catering to a dwindling congregation, it has long been eclipsed by its nearby parent church, Abundant Life, with its state-of-the-art facilities. When a pregnant parishioner (Amanda Seyfried) asks Reverend Toller to counsel her husband, a radical environmentalist, Toller is plunged into his own tormented past and finds himself questioning his own future and where redemption might lie. With the pressure on him beginning to grow, he must do everything he can to prevent everything spiraling out of control. With an outstanding cast that includes Oscar-nominee Ethan Hawke (Boyhood, Maggie’s Plan, Before Midnight), Amanda Seyfried (Les Misérables, Twin Peaks, Mamma Mia), and Cedric Kyles (Larry Crowne, Barbershop), Schrader has delivered a thrillingly fierce film that features an utterly mesmerizing performance from Hawke in the lead role.

«Ethan Hawke is razor-sharp in this addictive thriller» ★★★★★

«An exquisite piece of filmmaking»