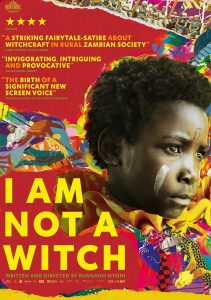 ORIGINAL TITLE:  I Am Not a Witch

SYNOPSIS: After After a minor incident in her village, nine-year-old Shula is exiled to a travelling witch camp where she is told that if she tries to escape she will be transformed into a goat. As she navigates through her new life with her fellow witches and a government official who espouses her, exploiting her innocence for his own gain, she must decide whether to accept her fate or risk the consequences of seeking freedom.

«A sharp-edged, magical-realist journey into Zambian society seen through the eyes of a young
orphan girl.»